TALK to our Experts!

Letter from Bahrain: A Jew at the Arab table

Letter from Bahrain: A Jew at the Arab table (originally published by JTA http://www.jta.org/2010/12/09/life-religion/letter-from-bahrain-a-jew-at-the-arab-table) 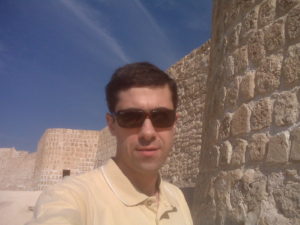 MANAMA, Bahrain (JTA) — It’s not often an observant Jew like me, living in New York, gets to spend Chanukah with a bunch of Arab diplomats in the Persian Gulf. But I found myself warmly welcomed when I showed up for the recent Manama Dialogue, a conference sponsored by the International Institute for Strategic Studies and hosted by the Kingdom of Bahrain.

Mindful of Shabbat, my hosts had arranged for me to stay at a hotel within walking distance of the main conference site. At the front desk, clerks appended a note to my room’s electronic key card: “Please assist him to open the door [tradition].”

After watching the sunset on Friday I was in Bahrain, knowing that Israel was hundreds of miles to the west across the Arabian deserts, I prayed, recited Kiddush and ate my LaBriute instant-warming kosher dinner. Then I emptied my pockets — no eruvs in Bahrain, at least for now — and headed outside past heavily armed Bahrain security forces and into the conference to hear U.S. Secretary of State Hillary Clinton address the opening dinner. When I met Sheikh Khalid, the foreign minister, he greeted me with a cheerful “Happy Chanukah!”

I had come to Bahrain as a representative of the American Council for World Jewry to hear Arab policymakers talk about what’s on their minds, and I learned a few things while getting to watch some interesting interactions.

On Friday night, both Iran’s foreign minister and the U.S. secretary of state shared a ballroom, though their eyes did not meet. With the VIP table positioned perpendicular to the dais, Iranian Foreign Minister Manouchehr Mottaki was able to avoid looking at Clinton during or after her speech, though she repeatedly tried to catch his glance. Mottaki sat through her remarks and the question-and-answer without ever turning his head or displaying any expression. His aides, however, took diligent notes.

When Mottaki spoke the next morning, I asked one of the technicians to “show me” how the electronic translation device works, so I could listen to a translation of his remarks without overtly violating the Sabbath by handling the device myself.

It wasn’t as if I was the only Jew in the kingdom; Bahrain has been home to a small but active Jewish community for more than a century. The kingdom has a newly appointed member of parliament who is Jewish; its U.S. ambassador is Jewish, too. Both are women. On my next visit to Bahrain, I hope to visit the synagogue.

Its geographic proximity to Iran makes Bahrain, like many Persian Gulf states, nervous about the Islamic Republic’s nuclear program. Jordan’s King Abdullah avoided all reference to — and reportedly all contact with — the Iranian delegates.

For their part, some of the Iranian delegates privately expressed satisfaction with an American empire that is overextended and compromised as a result of its overseas adventures.

“Thank you for invading Iraq,” one said.

Most of the Arabs on hand treated the notion that Iran’s nuclear program is intended only for peaceful purposes as an obvious joke.

The conversations at the conference weren’t only about Iran. In off-the-record sessions on Iraq and Yemen, generals and ministers spoke candidly. In his public keynote address, King Abdullah told his fellow Arabs that they must do more to show Israelis what peace would look like before time runs out.

In the Abu Dhabi airport on my way back home, I picked up The National, a newspaper published in the United Arab Emirates that carried an Associated Press report on the international effort to extinguish the Carmel forest fire in Israel. Innocuous talk of Israel is not so remarkable here, where pragmatism and economics often trump
ideology and religion.

The same goes for us. If Iran’s foreign minister can sit in on a speech by Clinton, we as Jews can afford to be in the same room and maybe hold the door open for them. Even on Shabbat, and maybe especially on Chanukah.

(Shai Franklin, policy director of the American Council for World Jewry, attended the Manama Dialogue as a guest of the Bahrain Foreign Ministry.) 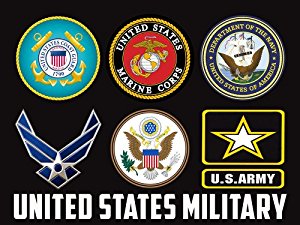 LAKEWOOD, N.J., March 30, 2017 /PRNewswire/ — Labriute Meals based in Lakewood NJ announced today that it has completed Operation Military Passover Meals and that all of the brave men and women in all branches of U.S. military will be able to enjoy Kosher for Passover meals wherever they are.

Labriute Meals was awarded an exclusive three-year DLA contract (Defense Logistics Agency) to supply kosher MREs (meals ready to eat) to troops stationed around the world. “Passover is an exciting yet challenging period at Labriute Meals. We have to ensure uninterrupted production of our meals to all of our market segments, but shipping meals in time for Passover to our brave men and women of all branches of the United States military is our highest priority,” says Abe Halberstam, President, and Founder of Labriute Meals. “Last year, Labriute was invited to attend the bi-annual JWB convention in Baltimore where I spoke in front of a gathering of all US Military chaplains. It was a humbling experience as well as incredibly gratifying to hear from the chaplains how much our Passover meals mean to our troops. Our Kosher MRE’s in addition to meeting religious observance, also serve as our soldiers’ connection back to their families who have to conduct a “Seder” without them,” continued Mr. Halberstam.

Mr. Halberstam explains, “The challenge stems from having to end our regular production of kosher MREs, then prepare and certify our equipment for our Kosher for Passover so production can begin. It is quite a complex logistical project as we have to coordinate “kashrut” of our plant as well as receipt of all of the Kosher for Passover food ingredients.”

Labriute ships over ten thousand kosher MRE meals which will be dispatched by the DLA to all branches of the military including active engagement territories. “We are truly honored to be part of this project. In 2016, Labriute was called upon to deliver additional meals to our troops. Our trucks drove through the night to meet one of the Navy ships in order for meals to reach their destination. A truly gratifying experience for all of our employees” said Mr. Halberstam. 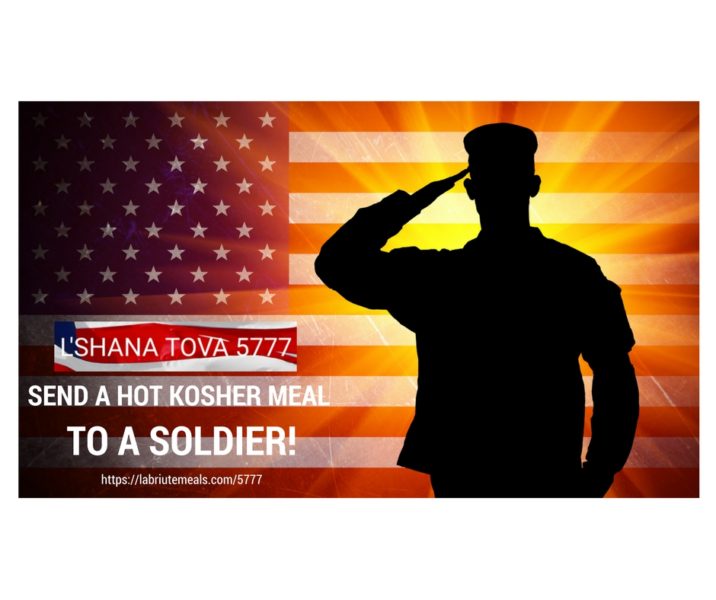 In only just a few short weeks we will be celebrating our 5777th year! While we apologize for the self-promoting nature of this blog, we believe that it is important nonetheless.

Some of our brave men and women will celebrate the ‘chagim’ away from home;  while their sacrifice allows us to worship and enjoy this special time of year we can our part by sending them our love and thanks. But, nothing can connect them to their Jewish heritage like a hot Kosher meal.

Labriute is the exclusive supplier to all branches of the US military of Kosher MREs (meals-ready-to-it) -they are used for training and campaigns when our brave soldiers are away from their base of operations.

This year, we’d like to suggest an additional option: Labriute will ship our homestyle 12oz. meals to an APO address in time for the New Year. To take advantage of this offer, please click on the photo or this link: L’Shana Tova 5777.

We want to take this time and send our prayers for the safety of all of our soldiers and to wish everyone a Happy & Healthy Shana Tova.

When one of our incredible USS Navy ships is about to sail to the Middle East and kosher meals are not on board, Labriute goes into action.

We received the call late Friday about a Navy ship that was sailing the next day. With Shabbos around the corner, all we could do is wait until Saturday evening, then we deployed Operation Kosher MREs;  we opened our warehouse, loaded a truck with a few thousand meals and two of our employees drove through the night for nine hours to meet the ship.

Labriute is the exclusive supplier of kosher meals-ready-to-eat (MREs) meals to all branches of the military and National Guard.

I was recently invited to attend and present at the JCC/JWB’s Biennial 2016 meeting in Baltimore. The JWB, “since 1917, has been to safeguard the rights, fulfill the spiritual needs, combat the loneliness and isolation and honor the service of Jews in the United States armed forces. We endorse Jewish chaplains to the Department of Defense and the Department of Veterans Affairs, augmenting their resources and advocating on matters of policy.” (http://jcca.org/what-we-do/jwb/)

I was honored to have been invited by Rear Admiral Rabbi Harold Robinson who is both the Director of the JWB as well the Director of Armed Forces and Veterans Services. The meeting was a rare opportunity for me to meet and thank the chaplains that support Jewish soldiers in every branch of the military and…in every base around the world. In addition to their spiritual and personal guidance, our brave Chaplains ensure that Jewish soldiers have access to kosher meals, as Labriute is the exclusive kosher meals supplier to the US Military.

Coming on the heels of “Operation Passover”, Labriute’s annual shipments of Pesach meals to all of our Jewish troops, it was gratifying to know that many of our soldiers were able to enjoy a kosher-for-Pesach meal even in remote areas.

I want to thank all of the incredibly dedicated and brave Chaplains for their service and for their invaluable input that will help Labriute continue to serve our troops with military kosher meals.